A Homily for the Third Sunday in Advent, Year C

It is better to light one candle than to curse the dark.

let me say it again.

It is better to light one candle than to curse the dark.

While they have been borrowed for countless purposes those words, an old Chinese proverb, have brought me more comfort during my life than any others I can think of.

As we pray and worship our way through the church calendar we experience advent as a time of joyful expectation. As much as we try to honor the mystery and meaning of advent, we have read to the end of the story many times and we know that it ends with Christmas. We know that God is preparing to enter the world and in the fullness of time to make all things new.

I spent most of Friday compulsively reading updates on my phone about the School Shooting in Sandy Hook Connecticut. As the body count grew and details became more and more horrifying I prayed for the 20 lost children and their families, for the teachers and staff, for the police and first responders who I saw holding to each other and sobbing in news reports, and I prayed for the young man who killed 28 people including himself. This morning we will pray again, and in our own ways, at our distance we will mourn. The president said simply “Our hearts are broken today” and they should be.

There are many things in this turn of events that make us angry, frightened, and sorrowful. What frustrates me most of all as we pray to a God who loves us, who loves every child that died two days ago, and who loves his child who became so lost as to murder those innocents, what just kills me is an utter lack of understanding. I want an explanation, I really do. These children were not martyrs or soldiers or police or criminals, and yet with each news report why they were alive on Friday morning and why they are dead now becomes more and more unclear, we are totally in the dark.

Advent, taken from the latin, means “the Arrival” but the arrival of what exactly? For the participants in our gospel story this morning about John the Baptist it remains unknown.
People are drawn to John because they believe that something is on the way, something new, something that will change the world. Some of them ask him “are you the messiah?” and John says that he is not, that he is unworthy to tie the sandals of the one who will come and baptize with fire and the Holy Spirit.

At this point John knows nothing of Jesus of Nazareth, hasn’t met him or seen him perform any miracles, depending on which gospel you read he may have never heard his name. None the less John stands in the darkness nursing this tiny flickering flame of faith he carries, believing with no evidence, no written story beyond the prophecies of old, that an advent, an arrival is at hand.

Darkness is frightening, not knowing is frightening, and many of the people to whom John spoke clearly desired to retreat behind the walls of privilege and comfort. This is why John calls out to them saying “you brood of vipers”, because their instinct was to withdraw from a frightening world and to strike out at anyone who might ask more of them.

Instead of waiting passively in the darkness John calls us to act, and to engage. If you have more than you need to live, give some away. If your job involves taking from others take only what is fair. If you are strong like a soldier, do not intimidate others into doing what you want. These things seem so simple, but they collapse so quickly under the weight of fear.

My wife Ari is far more savvy in the world of social media than I am, and she pointed out that on Facebook and Twitter there seemed to be two types of responses. Those who want to talk about the parts of our society that contribute to or could help reduce events like these, things like gun control and how we address mental health or violence in our culture. An opposing camp seemed to demand that this is not the time to talk about such things at all, or to suggest that there is no answer and that things like this will always happen.

To an extent they may be right.

And this is the good news that John the Baptist shouts in the wilderness. Even if we cannot see it with our own eyes, even if not in our lifetimes here, there will be a time when the darkness in ourselves, that cannot see the world getting better and wants to retreat, that is so afflicted with hurt and alienation that we inflict that hurt on others. These pieces of ourselves will be blown away from us like chaff on the wind, and there will be no more death, or pain, or tears.

But for now, we stand together, each of us with a small candle, our faith which is the Christ light, and the more of us that gather together to comfort and to care for and to carry each other the more light we have, and the further we can see. But there is still an awful lot of darkness out there, some of our own making, and in this life we will never see and understand everything that happens in this world.

It is better to light one candle, than to curse the darkness. 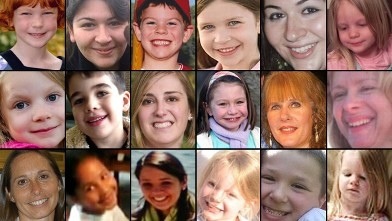 John said to the crowds that came out to be baptized by him, “You brood of vipers! Who warned you to flee from the wrath to come? Bear fruits worthy of repentance. Do not begin to say to yourselves, ‘We have Abraham as our ancestor’; for I tell you, God is able from these stones to raise up children to Abraham. Even now the ax is lying at the root of the trees; every tree therefore that does not bear good fruit is cut down and thrown into the fire.”

As the people were filled with expectation, and all were questioning in their hearts concerning John, whether he might be the Messiah, John answered all of them by saying, “I baptize you with water; but one who is more powerful than I is coming; I am not worthy to untie the thong of his sandals. He will baptize you with the Holy Spirit and fire. His winnowing fork is in his hand, to clear his threshing floor and to gather the wheat into his granary; but the chaff he will burn with unquenchable fire.”

So, with many other exhortations, he proclaimed the good news to the people.