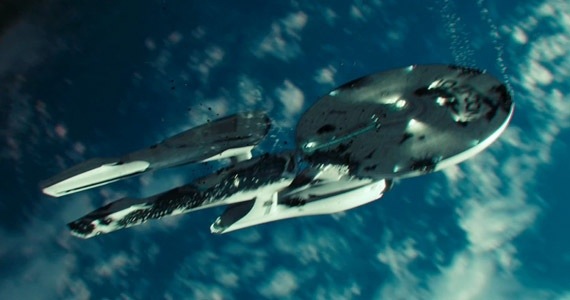 I would like very much to see a Star Trek movie now please Mr. Abrams.

In full disclosure I am a long time Star Trek fan. Raised from an early age on a steady diet of Kirk and company as well as the continuing voyages of “Next Generation” through “Enterprise”, it should surprise no one that I would have some strong feelings about JJ Abrams’ reboot of my beloved franchise. That being said I responded to 2009’s “Star Trek” with unreserved delight. Abrams’ first outing was a blast that stayed true to the source material in tone while updating the filmaking and using a very clever plot twist to conjure up a fresh new canvas on which to paint new adventures. I look forward to seeing one of them.

To be clear, “Into Darkness” is a reasonably good sci-fi action film. There are explosions and dizzying action sequences around every corner, I can say I was literally on the edge of my seat gripping the armrests for many of them. But it just isn’t Star Trek. The script is essentially old ‘Trek material, put in a blender, glued back together in no particular order, with occasional character reversals passing for “clever” choices, and fired at the audience in a stacatto fashion to pass for “edgy”; and yet if the cast was swapped out for different characters and the Enterprise made to look like anything else, I could watch this movie and leave with a shrug, never thinking to myself “That was kind of like Star Trek”.

The genius of the 2009 film was that it respected the source material while not being enslaved by it. With the exception of the red and grey starfleet “dress” uniforms the designs were bright and clean, updating the aesthetic goals of the 1960s original, the same can be said for the plot, pacing and glimpses of the future which all conveyed the optimism and adventurous spirit of the original while either avoiding or proudly owning the corniness inherent in the endeavor.

“Into Darkness” manages to be both enslaved by it’s source material and disrespect it at the same time. Obvious choices have been made to downplay the familiar colored-smock costumes in order to give air time to designs which evoke the uniformity of empirial costumes from Star Wars more than anything Trek-like. With the exception of the familiar bridge the whole world is subdued into muted shades that are seperated from dystopian sci-fi films only by a disturbing cleanliness that suggests singapore like totalitarianism rather than any golden age for humanity and friends.

Which is my biggest beef with the movie. If it isn’t clear that humanity has managed to achieve an optimistic degree of collective enlightenment to form a society worth aspiring to, why do we care if it is endangered by a super-powered terrorist? If the Enterprise never shows itself to be worth a damn in a battle or otherwise, do we really care if it gets blown up? Why are space vessels even neccesary at this point since last film they learned how to teleport anywhere in the galaxy on a whim, and one character does the same at the beginning of this movie?

While all good geeks know there are myriad differences between Star Trek and Star Wars one key for me has always been that Star Wars is an arthurian legend, a fantasy set in space, so who cares if the science is coherent. Star Trek is both science and cultural conjecture, assuming the best of humanity and using a Hornblower-esque crew to explore and ask “what if…?” Writers have spent decades keeping the scientific and historical features of Star Trek straight and while the first movie had no shortage of “oopsies” they were internally consistent and the time-travel gambit was so clever as to make up for any of Abrams’ rookie mistakes as a newcomer to the franchise. In “Into Darkness” Abrams’ seems to take glee in ignoring the previous canon while creating giant, gaping, sucking plot holes, filling them with disjointed sci-fi tropes and calling it “Star Trek”. Even the score is the same six-bar theme repeated over and over, I’m convinced Jerry Goldsmith could still write a better score (and he’s dead). 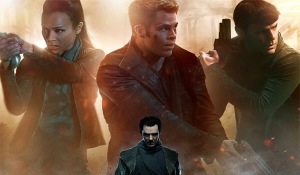 All is not lost however. The cast is just as good as last time, it is a bit sad that many possible arcs for character growth are hinted at in passing and then ignored in favor of the next big explosion but the cast make due very well with what they are given and, along with Benedict Cumberpatch’s inspired villainy, hold the movie together just by being there. “Into Darkness” also avoids breaking the Hippocratic oath of sequel making that is to “do no harm” to further ensuing and hopefully superior movies. Because of this it can be enjoyed as a stand-alone sci-fi flick and leaves me entirely willing to lay my money down the next go round. In fact, from what I’m seeing Abrams’ departure from ‘Trek to take on Star Wars may ultimately be a mitzvah for fans and newcomers alike. I hope they find fresh new voices interested in telling genuinenly new Star Trek stories. I just hope they also give Rick Berman or Brannon Braga a seat at the table to explain why people have followed this series for half a century now.