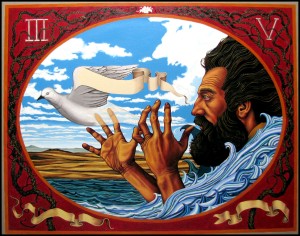 A Homily for the Sunday Closest to September 28, Year A

“By what authority are you doing these things, and who gave you this authority?”

Jesus was trouble, he still is.

Israel was occupied by Rome and the leaders of the Jewish people enjoyed power and financial security, their only job as far as the Romans were concerned was to keep the peace, to suppress any voices of insurrection that might rise up from the people.

There had been another trouble maker. His name had been John. He preached that the Jews had become complacent and sinful under the Romans, and he offered any who desired to be cleansed of their sins a baptism in the Jordan river. He baptized people from all walks of life, and he became incredibly popular, so much so that the high priests felt they should join in too, but when John saw them he called them a “brood of vipers”.

Luckily for them, John ran afoul of Herod, the Jewish King who ruled on behalf of the Roman Empire. John was captured, and executed.

Since then, all had been quiet in Jerusalem until Jesus and his followers arrived. Some said he was John’s cousin, others said he had been prophesied by John as the one who would baptize with the Holy Spirit. What was clear was this Jesus aimed to misbehave.

He taught his strange views of scripture to Jews and Gentiles alike, and worse, he had thrown out all those who sold things in the Temple. Something had to be done.

So they tried to get him to say something publicly that would get him into trouble. If they could just get Jesus to say that he was the Messiah, or the Leader to unite the Jews in rebellion, just one sentence suggesting that his followers should take up arms, they could have him arrested.

“By what authority are you doing these things, and who gave you this authority?” they ask him, hoping to trap him. But Jesus, in the classic rabbinical tradition, asks them a question in response…

“Did the baptism of John come from heaven, or was it of human origin?”

and they were trapped, they couldn’t say “Yes” John’s baptism came from heaven, because if they had believed that John was a true Prophet than they should have done something when he was taken, and if they say “No” then the crowds they are supposed to represent will see that they are out of touch.

And so the High Priests say… “We do not know”

Sound familiar? I read those words and I think of our own modern politicians… “We’ll form a committee”, “An investigation is pending”, “The evidence is inconclusive”.

The failure of leadership demonstrated in this morning’s Gospel is eerily familiar to us today, not because they failed to discern the right thing and acted wrongly, but worse than that, they never even tried. When confronted with John the Baptist they never asked themselves “Where does this baptism come from?”, instead they asked themselves the same questions that an alarming number of our leaders seem to today…

“What will keep us safe in our jobs?”

“What will keep the money flowing from our benefactors?”

When Jesus challenges them to answer the real question, they are defeated because their moment, their opportunity to make a difference has passed them by.

Jesus hammers his point home, he talks about two brothers, ordered by their father to work the fields. One agrees that he will go and work the fields but does not; and the other flatly refuses to go, but then finds himself compelled to do the right thing.

“Then truly I tell you”, Jesus says, “These tax collectors, these prostitutes whose profession desecrates the Torah , these gentiles who don’t even believe in God the way you do, they are entering the kingdom ahead of you, because they may not always say the right thing, but when they see something that moves them, when they heard John the Baptist they followed their hearts.”

I saw something this week that really struck home the difference between leadership that takes action and leadership like that of the elders and high priests.

Don’t ask don’t tell was a law for almost two decades. It was meant to be a step forward but it wasn’t. It hurt our country and it hurt a lot of good people. The most frustrating to me about this law is that the question of whether or not Gays should be allowed to serve in the military has been settled for a very long time. In over a decade I haven’t heard a mainstream politician make the argument that gay people are evil and our military needed protection from them. Instead the argument has been about unit cohesion, the bias of those already in the military, and the difficulty of changing policy. So even after the question “Is this policy right or wrong?” was asked and answered our leaders responded to the question of what to do about it the same way the leaders of Israel did…

This past week, don’t ask don’t tell was finally repealed. The significance of this for our men and women in uniform hit home to me when I saw a video on YouTube.

A member of the Air Force had been documenting his experiences as a gay man in the military, the camera angle always hid his face and those of his friends, to protect their careers. This week his camera showed his full face, and instead of an interview or a monologue he picked up his phone and he called his parents. He came out to his father who responded without hesitation that he loved him and that he was proud of him and that he had thought he might be gay for sometime. As I listened it seemed like the father had been waiting a long time to say this.

Why was this father forced to wait to let his son know that he loved all of him, was proud of all of him?

Why did this young man have to live in fear while he served his country?

What truth’s do we hide from behind “I don’t know”?

A few weeks ago, my wife Ari took me to go see the film “The Help”. I had not read the book and it had a distinctly chick-flick vibe to it, so I was surprised when it turned out to be one of the most inspiring movies I have seen in years. Without giving too much away, a privileged young white woman makes it her mission, to give a voice to the oppressed black housekeepers and nanny’s of Jackson Mississippi in the early sixties. Her life is altered by her experiences and there is some sacrifice on her part, but she doesn’t sell all of her worldly possessions and walk the streets wearing a sandwich board. What she does is accept that she knows something is wrong, and what was most striking to me, was that when this brought her into conflict with her peers and friends they all say the same thing: “Things are just fine as they are”

Jesus is trouble for those of us who have comfort and power. Christianity calls upon us to see things as they are and to be unsettled.

The good news, the great news is that this unsettled feeling, a nagging awareness that things are not “fine as they are” is how God invites us to participate in building the kingdom of heaven.

Nowhere is it written that every prostitute, tax collector, and gentile that heard Jesus’ message abandoned their careers and families to join Christ on his travels. Like all of us they had responsibilities and vocations. The elders and high priests in this morning’s Gospel also had responsibilities and families. It is easy to empathize with their desire to hide in comfort behind their answer to Jesus’ question…

But what what if we do know?

What if we know that the way we use this planet is destroying it?

What if we know that the way we live our lives in this country supports economic slavery and usury in other countries?

What if we know that we have a standing invitation from God to help create the kingdom of heaven here and now?

What if we know?

When Jesus entered the temple, the chief priests and the elders of the people came to him as he was teaching, and said, “By what authority are you doing these things, and who gave you this authority?” Jesus said to them, “I will also ask you one question; if you tell me the answer, then I will also tell you by what authority I do these things. Did the baptism of John come from heaven, or was it of human origin?” And they argued with one another, “If we say, `From heaven,’ he will say to us, `Why then did you not believe him?’ But if we say, `Of human origin,’ we are afraid of the crowd; for all regard John as a prophet.” So they answered Jesus, “We do not know.” And he said to them, “Neither will I tell you by what authority I am doing these things.

“What do you think? A man had two sons; he went to the first and said, `Son, go and work in the vineyard today.’ He answered, `I will not’; but later he changed his mind and went. The father went to the second and said the same; and he answered, `I go, sir’; but he did not go. Which of the two did the will of his father?” They said, “The first.” Jesus said to them, “Truly I tell you, the tax collectors and the prostitutes are going into the kingdom of God ahead of you. For John came to you in the way of righteousness and you did not believe him, but the tax collectors and the prostitutes believed him; and even after you saw it, you did not change your minds and believe him.”